If you can remember back to somewhere around Fourth Grade, you probably learned Spiders aren’t insects. Biologist name and organize living things into groups, and bigger groups, and bigger groups based on their characteristics and genetic material. Spiders, along with Scorpions, and Ticks (and many others) belong to a group called Arachnida. Insects belong to a group called Insecta, which includes animals like Cockroaches, Ants, Fleas. We can combine these two groups, plus the group that contains animals like Centipedes and Millipedes, and the group that contains Crustaceans (like shrimp, crabs, crawfish) and call them all Arthropods.

The Striped Bark Scorpion, Imported Red Fire Ant, and delicious Quebec Lobsters are of course very different creatures but they also have similar body composition, metabolism, and nervous systems. We use different chemicals and methods to treat scorpions than we use to treat ants. However, if pesticides are applied incorrectly, they can wash into streams and rivers and kill not only crawfish but other important organisms in the food chain and devastate rivers, lakes, and even coastal marshes and bays. If you (as a homeowner or professional) use any pesticide, please carefully read and follow the information on the label. 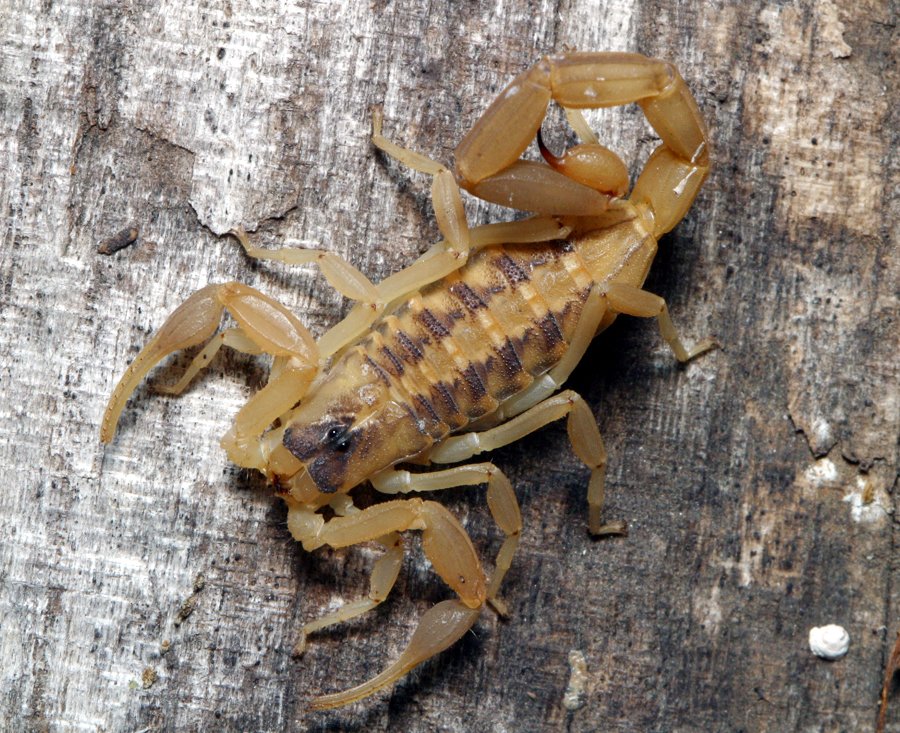 In the Summer and Winter, arthropods like Striped Bark Scorpion try to move into homes. In the Summer, they are looking for water and in the Winter, they are looking for warmth. They are also following their prey — spiders, bugs, and beetles. The rest of the year, they live in wood piles, brick piles or other debris, under rocks, in mulch and bark. These harborages should be cleared or at least moved away from the house. Scorpions are most active at night. The Striped Bark Scorpion is the species we have in our area. The sting is painful but not considered lethal. The Arizona Bark Scorpion is considered lethal. We work with our customers to identify harborages, seal openings where scorpions are getting into the home, and eliminate their food sources. 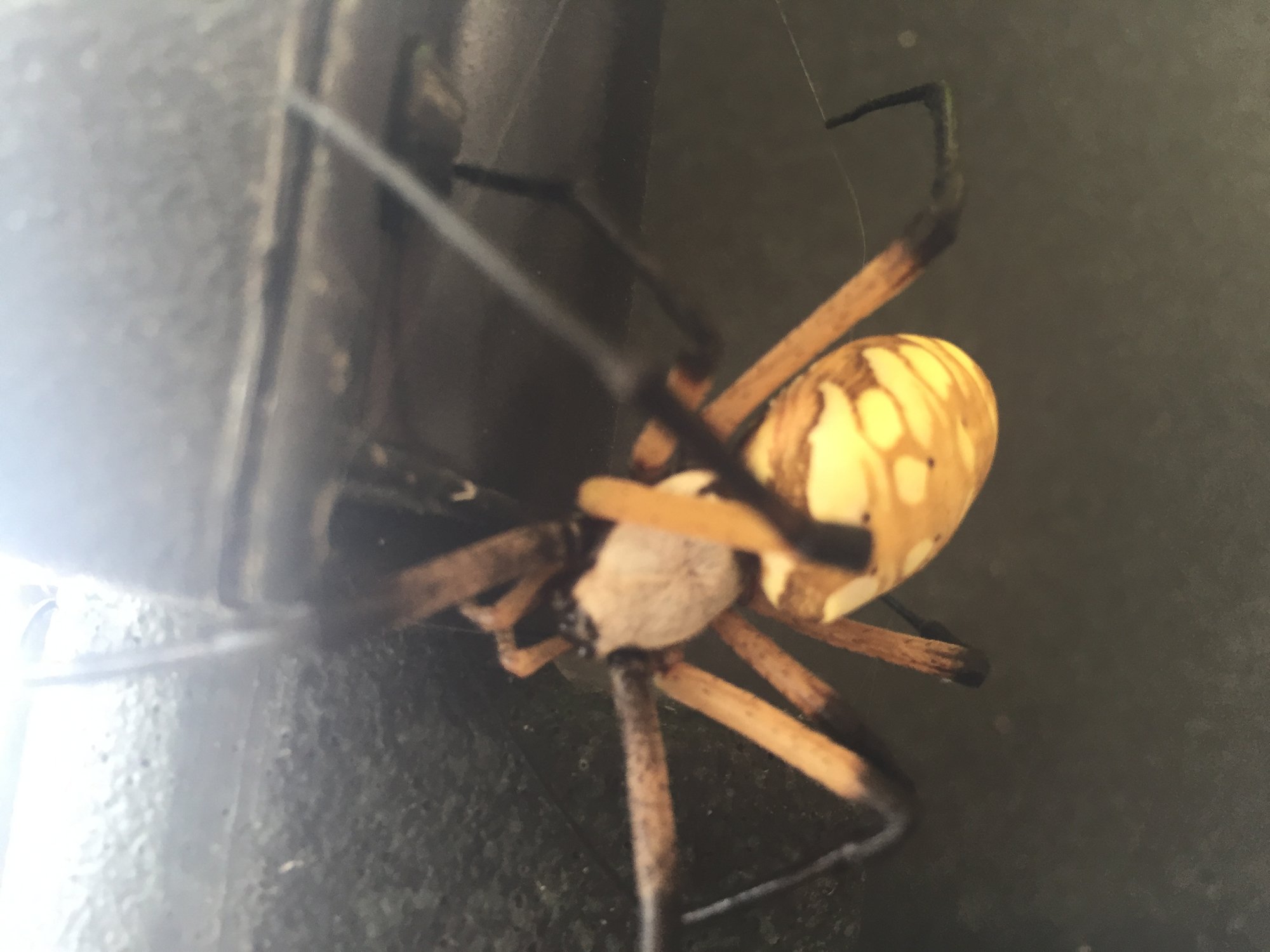 Most spiders aren’t going to hurt you. In our area, we have two dangerous spiders, the Black Widow and the Brown Recluse. I don’t mind a spider on a shrub here and there but we remove them and their webs from the eaves, windows, and doors as part of our Quarterly General Pest Control Service, unless the customer requests otherwise, because it’s Halloween or something. Pictured is a Yellow Garden Spider that built a web near a citrus tree. She was doing a good job on the leaf miners and white flies. 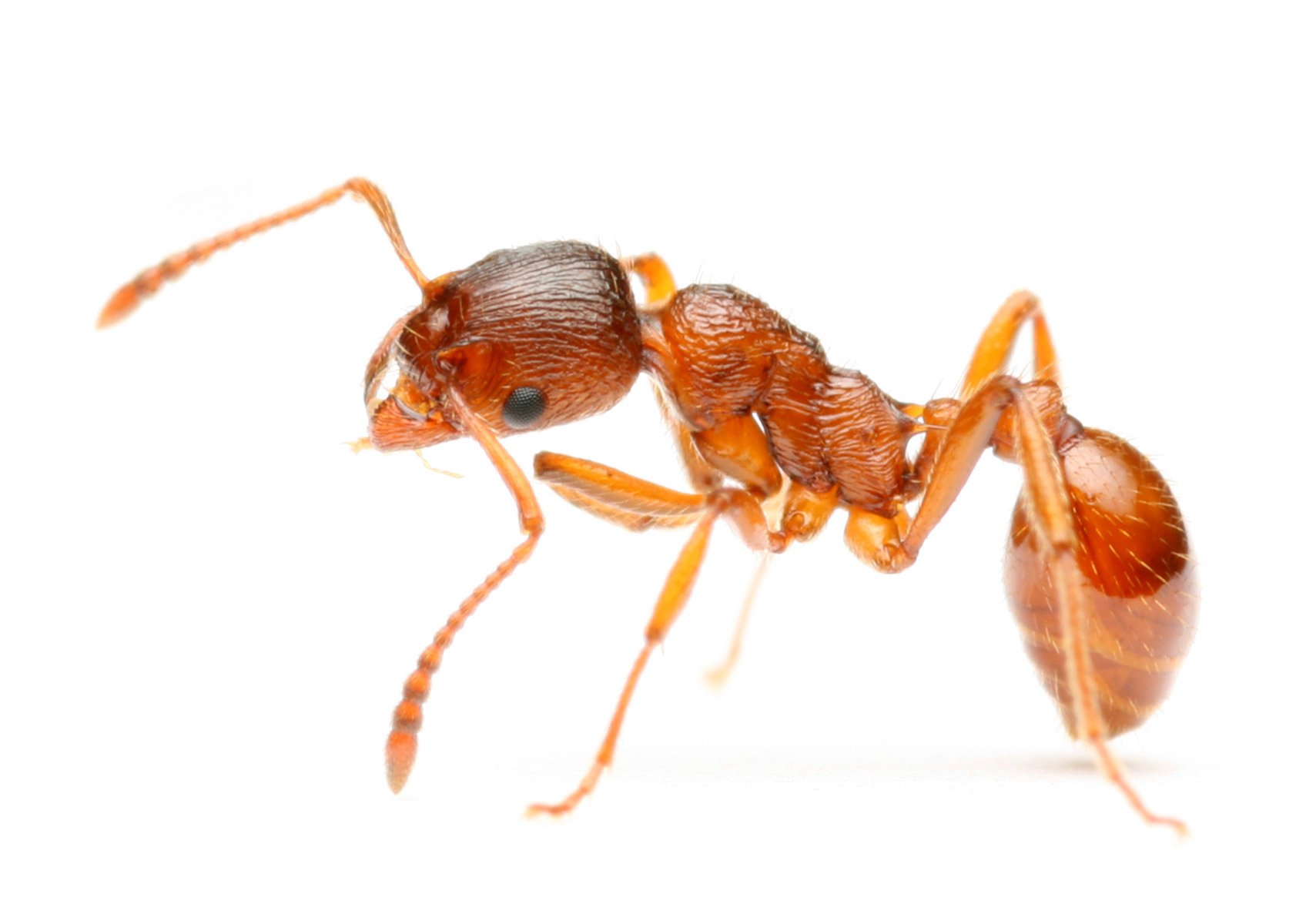 Ants are another invader in homes and lawns in our area. They can be tough for the homeowner to treat effectively. Many homeowners become frustrated because they treat an ant mound, it disappears only to reappear 10 feet away.

Imported Red Fire Ants came to the US on a ship in the 1930s and have been a serious problem in our area at least since the 1970s. They infest lawns and will invade homes in the summer, seeking water. The sting is painful. Plus, they bite while they are stinging you. Nice. We treat lawns in the spring and maintain control all year. If a mound does pop up, we spot treat it with no additional charge.

As bad as Imported Red Fire Ants are, Crazy Ants may be worse. 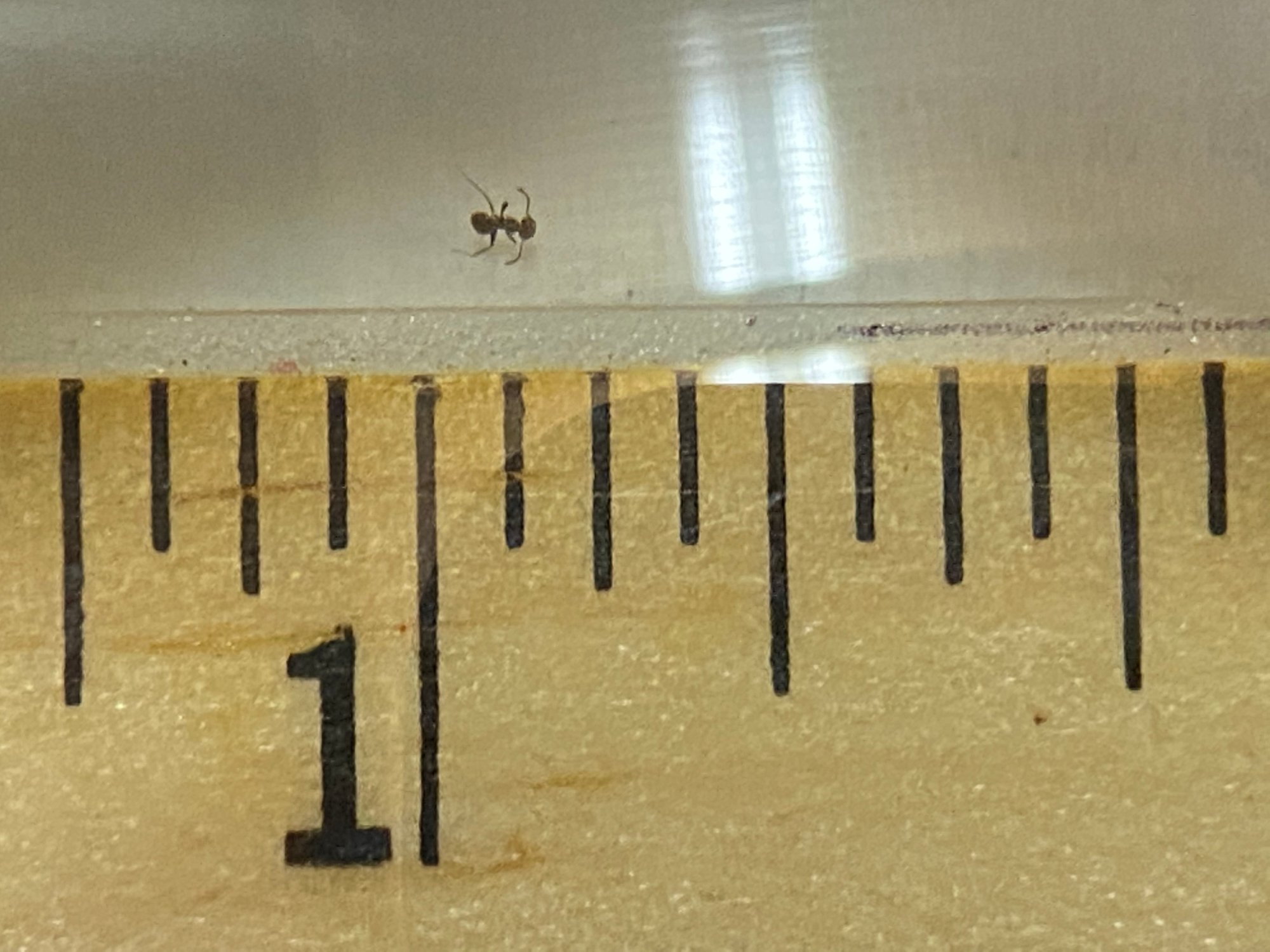 Pharaoh Ants (we always called them Sugar Ants) are found in kitchens, bathrooms, electrical outlets, or where someone dropped or spilled something sweet. They’re tiny and golden to reddish in color.

Texas Carpenter Ants (we always called them Wood Ants) are red with a black abdomen and about 3/8″. They usually nest in trees but can come indoors. They usually don’t destroy houses like the carpenter ants in the midwest and other parts of the country but they are a nuisance.

Pavement Ants live under sidewalks or roads or in cracks in concrete. They are 1/4″ long and brown. 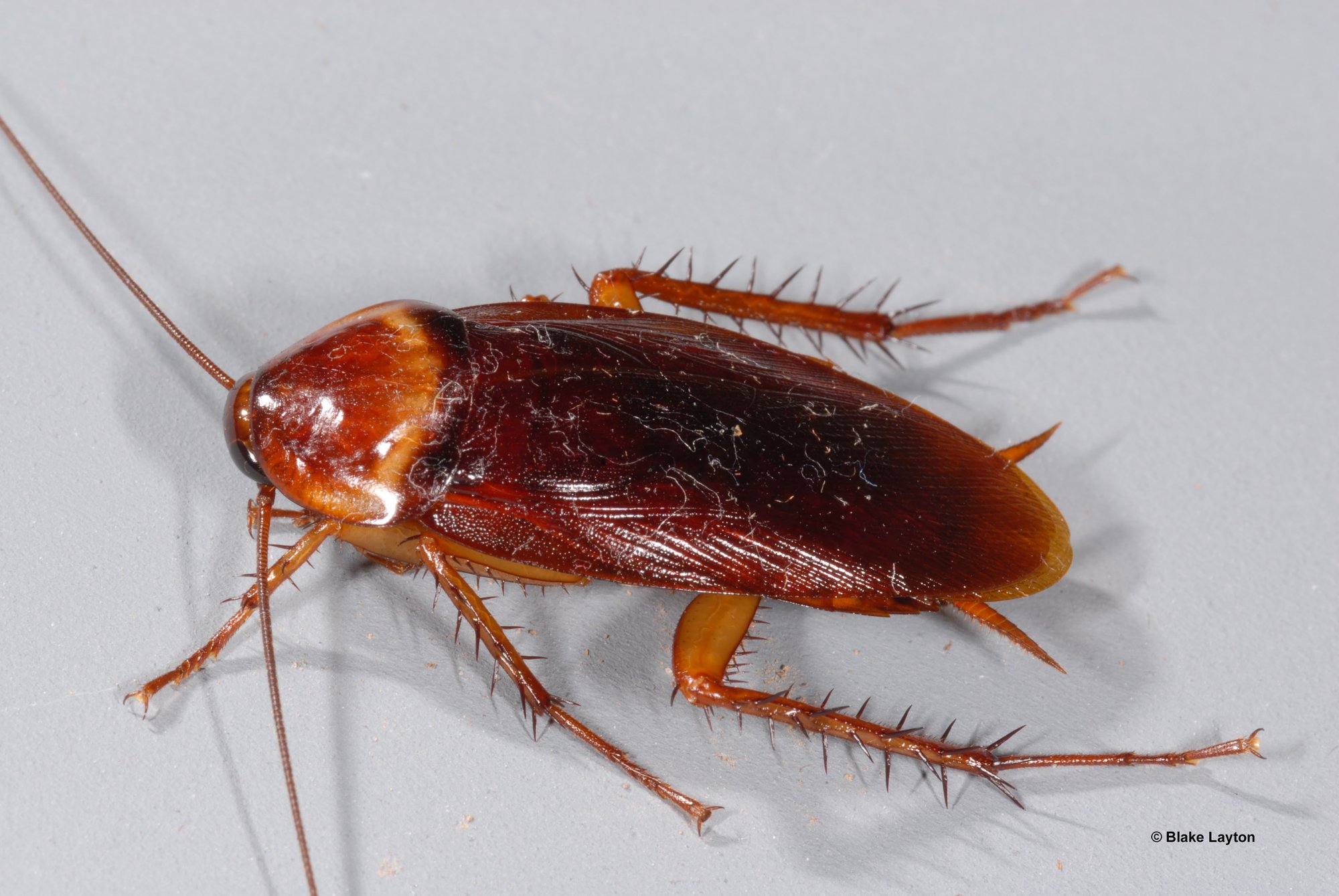 We have several species of cockroaches in South Central Texas. The two we deal with most are the American Cockroach and German Cockroach. They carry diseases like salmonella and can trigger asthma. Roaches should not be tolerated at all in the home. Give Acorn Pest Control a call because we love killing roaches.

The American Cockroach (water roach, tree roach) is actually native to Africa and the Middle East. They can be over 1-1/2 inches long, move very fast, and can fly when the temperature gets above the mid 80s. They like high temperatures and love garages, especially refrigerators and freezers in garages. They also live in sewers and septic systems, under rotting leaf matter and wood piles.We use a combination or baits, dusts, and liquid concentrates to maintain control. If American Cockroaches are showing up indoors, we also treat drains with a biofoam to aid in control. We get very good control with these methods.

The other species of cockroach we mostly see in our area is the German Cockroach. It’s found in restaurants, commercial kitchens, hotels, and homes. They are much smaller than the American Cockroach, about 1/2 inch long and about as big around as a pencil. German Cockroaches two stripes on either side of their pronotum (the shield just behind their head).

Three weeks after treatment, only one live cockroach was observed during inspection.

German Cockroaches reproduce very quickly, making pesticide resistance a concern. We get control quickly and maintain control using a baits, dusts, Insect Growth Regulators (IGR), and concentrates if needed. In all but the most extreme cases, we prefer to use an Eco-friendly/Green Chemistry approach in homes. Sanitation plays a large role in keeping the population under control. 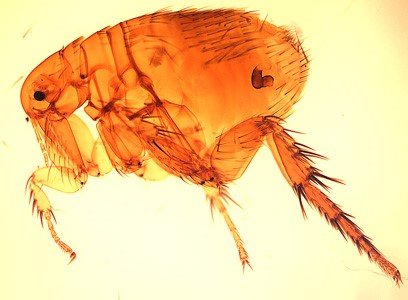 Fleas and ticks not only make your pet miserable but they can carry diseases that can infect people and pets. The CDC lists The Plague, typhus, tapeworms, and Cat Scratch Fever as flea borne diseases.

Texas Department of State Health and Human Services list Lyme Disease, Spotted Fever, and others as diseases ticks can spread. Fleas and ticks can be very challenging for homeowners to control without experience and knowledge of the life cycle of fleas and ticks, even if homeowners are treating their pets. We treat outdoors and indoors to eliminate the infestation and keep you and your pests happy and healthy. 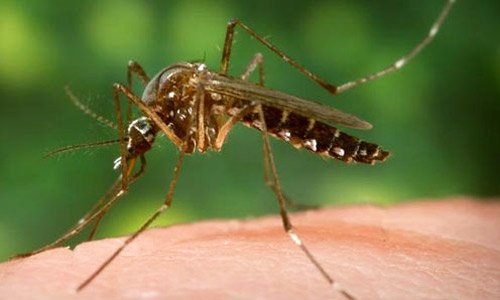 According to Texas A&M Agrilife Extension, there are about 55 different species of mosquitoes in Texas. Different mosquitoes have different breeding requirements, feeding and resting habits.

Some species, like Aedes aegypti, fly under 100 yards while others, like Aedes sollicitans can fly 40 miles.  Some only bite at night (Culex erraticus), some only during the day (Aedes triseriatus),  some only at dusk and down (Culex nigripalpus) and some bite 24/7 (Aedes taeniorhynchus). Some mosquitoes rest in vegetation and trees a couple of feet above the ground. Other mosquitoes rest in the tops of trees up to 30 feet above the ground.  Mosquitoes are also grouped by where the females lay their eggs and the larva develop (Permanent pools, Transient water, Floodwater and opportunistic places like Tree Holes). Knowing the species and patterns of the mosquitoes helps us target the ones bothering you.

Mosquito bites can be painful and make outdoor gatherings miserable. Mosquitoes are also notorious for carrying diseases. The State and County control the spread of disease through large-scale operations. At Acorn Pest Control, we work hard to make sure you can enjoy a pest-free backyard. We use: 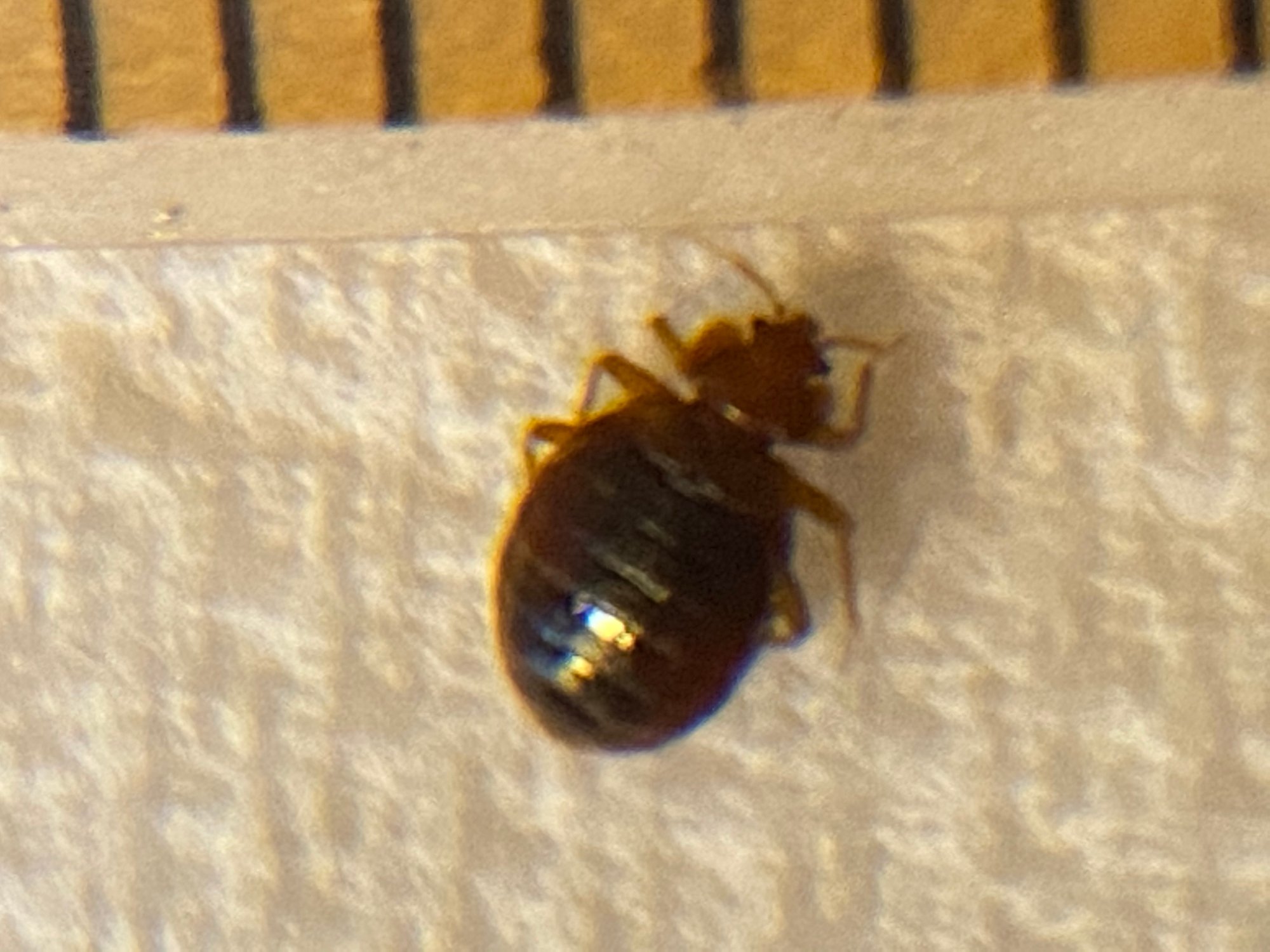 More and more people are being affected by bed bugs. Over the last 20 years or so, the US has seen a dramatic increase in bed bug infestations. There are various ideas why this is happening — increase in travel, increase in global travel, DDT being banned.

Bed bugs are small, reddish brown parasites. Not including legs, they are more or less oval and about 1/4 inch long (about the diameter of a pencil) but are as thin as a paperclip, until they eat. Then they expand like an accordian. The increments on the ruler are 1/16″.  Because they are so thin, they can easily hide in the tufts of mattresses, in the bed frames, and under baseboards.

Bed Bugs are very difficult for homeowners to control. Other than being able to hide easily, they have tiny, smooth legs that are tapered like toothpicks. This makes it difficult for the Bed Bug to pick up a lethal dose of pesticide. This has caused homeowners to try using various home remedies like baking soda, sale, and dryer sheets. None of which work. Professionals use various methods including heat, aerosols, dusts, concentrated insecticides.

Acorn Pest Control uses a combination of insecticidal dust, aerosol insecticide, and a natural fungus enemy of insects. This revolutionary, EPA-approved, natural biocide, was developed by researchers at Penn State University. The fungal spores are applied in strategic barriers in key areas. When the bed bugs cross the barrier, they are infected with the fungal disease and die within 3-7 days.

We have been very pleased with the results.

We can also offer this method as a preventative, on a quarterly basis, along with monitoring and surveillance to, nursing homes, group homes, shelters, any intake facility where people bringing articles from home that may contain bed bugs or their eggs. The disruption is minimal and it is much better to catch the problem and eliminate it in one room before it affects a wing or the entire facility.

We recently moved to the area and thought we had pests in our attic. It turned out to be an old nest thank goodness. James came out several days and put down traps and food in an effort to see if he could trap anything. He treated for roaches inside and out and for cutter ants and fire ants in the yard. He is from the area so understands the bugs and pests in the area. He helped with a clogged dryer vent and had a handy man come with him one trip to help replace some outside dryer vent flaps that were missing so no pests would get inside. Very courteous and professional and always on time. Thank you James.

Very kind and professional. Knowledgeable on the products he uses and what he’s using it on. Pricing is great. We will definitely keep using him in the future.

I want to thank you for the wonderful job you did. I just came home and saw your work and it was truly a great job!! Thanks again. 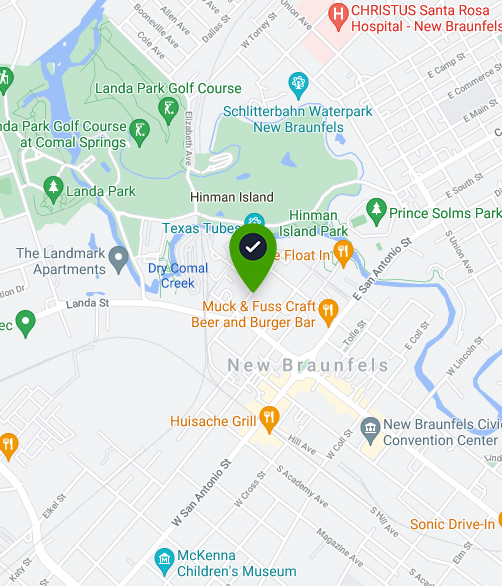 We are the most affordable and dependable service in the area, proudly serving the diverse range of spaces for years. We work really hard to implement the best pest control practices.